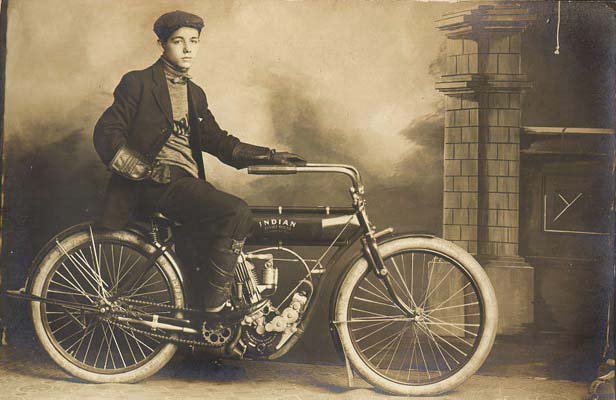 Early photograph made in Concord of Liam Mularchy with a "borrowed" Indian motorcycle.

Few people know that Cabarrus County is home of North Carolina's first motorcycle gang. The gang founder was Irish immigrant Liam Mularchy who arrived in America in 1909 after hearing about Cabarrus County from his Dulin cousins. Born in 1895, Liam Mularchy was no saint growing up in County Cork, Ireland and left the country with several warrants for his arrest.

Liam Mularchy's first two years in America were uneventful, arriving in Philadelphia before quickly making his way to Cabarrus County. He is listed in the 1910 Cabarrus County census living with his cousin Sugar Dulin in what is now the Midland area. Sugar Dulin's occupation is listed as blacksmith in the census but folks in the area knew Sugar Dulin as a small time, high quality moonshine maker. Liam Mularchy made money through various odd jobs that included clerk at Dr. W.W. Flowe's general store and sexton for Buffalo Creek Presbyterian Church.

Mularchy's first motorcycle ride was on a stolen Otto model in Ireland at the age of fourteen. He soon began stealing other motorcycles for what most people thought as joy riding, Mularchy was using the rides to form opinions about the various motorcycle brands and models. After his initial quiet life in Cabarrus County, Mularchy's first run in with the law concerned a stolen Indian motorcycle in Concord in June, 1911. A few months later he was arrested for stealing a Harley-Davidson in east Charlotte. The Harley was found three days later rapped around a tree on Highway 24/27. Mularchy was arrested at the Cannon Hospital in Concord as he recovered from his injuries.

The next summer Mularchy settled on a single brand, preferring the locally built model from the now defunct Dixie Motorcycle Works. Mularchy often commented that the Otto, Diamler, Indian, and Harley-Davidson had nothing on the power generated by the Dixie engine. The other brands provided some comfort to the rider through springs and design; however the Dixie Motorcycle was likened to an rocket-powered iron rail that went an astounding 75 miles per hour. Liam Mularchy incorporated the Dixie Motorcycle company's use of the Confederate flag into the original emblems of the gang, a four leaf clover with the Confederate flag's blue cross on red background. The gang's motto was Go hIfreann leat!, Irish Gaelic for "To hell with you!"


When World War broke out in Europe, Mularchy  returned to England and volunteered for the Irish Guards, an all-Irish regiment in the British army. Mularchy distinguished himself in combat, taking active roles in the battles of the Marne, Ypres, Somme, Cambrai, and Flanders. Several times he was offered promotions but would accept no rank higher than corporal. Several times he was busted to private for drinking or wild cavorting with local French women but could always be counted on in battle. Mularchy returned to America in 1919, sporting his ribbons, wound stripes, and several medals, including the Victoria Cross and French Legion of Honor. He was recommended for the American Distinguished Flying Cross for a raid on a German airstrip until it was discovered that he had stolen the Sopwith Camel while it was warming up on the tarmac.

While overseas, Mularchy's gang remained active but lacked the flamboyance it's leader provided. Member's Jimmy "Scooter" Hill and Clarence "Tools" Stirewalt occasionally made the papers by out running the local police or disturbing the peace in downtown Concord as they rode down Union Street on Sunday morning raising hell and shooting pistols.

Mularchy's war stories and battle wounds only made him more popular with the ladies and the dare-devil combat only raised the bar for his exploits once he returned to civilian life in Cabarrus County. His banked military pay soon ran out and Mularchy needed a steady source of income. Prohibition rocketed Sugar Dulin's illegal liquor business. Dulin was one of only a few moonshiners with the business sense to bring in money before delivering the product by annual or semi-annual subscription. Sugar's brother Seamus was quite the dandy, the ladies man of the three. Seamus spent much of his time in more socially elite circles in downtown Charlotte. It was Sugar Dulin's 'shine that was served to the gentlemen in William Henry Belk's house on Hawthorne Avenue. Dulin's was also served in the Queen's College President's House, but only to the closest of friends. In Concord, wealthy businessmen like Charles A. Cannon and John Barnhardt proudly displayed Dulin's work in fine crystal decanters with the Dulin red and blue enameled clover crest. Charles Cannon's usual toast was "Go hlfreann leat!" with a wink and a smile.

Sugar Dulin sold subscriptions to his moonshine and the gang's first purpose was to deliver the moonshine to subscribers as each new batch was ready. The original gang members were Mularchy, Sugar Dulin, and Dulin's brother Seamus. Liam quickly sought like minded men with an aversion for the law and a need for speed. Mularchy made his way throughout the North Carolina Piedmont charming women and robbing bars and gas stations. Often he would make his get-a-way with a girl on his bike but stopping to let her off at the county line, lest he be arrested for kidnapping or transporting women across county or state lines for immoral purposes. Mularkey was famous for providing a glorious meal for a lovely lady, leaving a big tip, but failing to pay the check as he absconded with the girl. Several times we also paid off the mortgage for some poor family whose fight against eviction had made the papers. He even purchased a new bell for Bellewater Presbyterian, a black church founded by the former slave members of Buffalo Creek Presbyterian.

One time Mularchy delivered gallons of bootleg liqour and all four of Concord's regular prostitutes to the Robert E. Lee Training School, a juvenile detention center on Highway 49. Mularchy provided bootleg liquor for nearly any boy that desired it but limited time with the women of low virtue to boys aged sixteen and above. The following Sunday every minister in the county preached on the evils of alcohol and sexual promiscuity using Mularchy as their example. The boys at Lee Training secretly branded themselves with self-made tattoos of Mularchy's clover-leaf icon. As the men aged, they quietly held re-unions to commemorate the day Liam Mularchy "made them men." Even the surviving  prostitutes attended most years.

As Mularchy's exploits made the area papers, his last name was Anglicized to "Malarkey." The early Sons of Malarkey jackets and papers feature the original Gaelic  "Mularchy" spelling and motto in Gaelic. Sometime during the 1930's the members moved to the more widely recognized English spelling "Malarkey", capitalizing on the now locally famous name.

Following prohibition Sugar Dulin became a legitimate businessman and the use of roughnecks on motorcycles to deliver bootleg liquor was no longer needed.

By World War II, Liam Mularchy was nearing fifty years-old and the flamboyant events occurred less often. America's entrance into the war took all the crazy young men to Europe or Asia and the few remaining took advantage of the high wages the labor shortage produced to settle down. Sugar Dulin was a wealthy, respected businessman who had diversified into the textile business and opened a small bank in Mt. Pleasant. Seamus Dulin was shot to death in Charlotte, caught in the arms of a wealthy banker's wife. Liam Mularchy met his demise one night in August, 1945, celebrating the end of the war in Europe. Riding home on his favorite Dixie bike, he had too much moonshine and drove into the trees. Mularchy was killed instantly but amazingly the bike wasn't scratched. Cabarrus Creamery owner Robert L. Burrage, a former Sons of Malarkey member, purchased the motorcycle from the estate and displayed it at the Creamery for years.

As rambunctious young men returned from the war, many near-do-wells sought to capitalize on the "Sons of Malarkey" name and adopted it for their gang. By the mid-1950s the gang was dealing drugs and involved in prostitution rings in Concord and Albermarle. Robert E. Burrage, son of Robert L. Burrage, said his father was ashamed of the later group using the Malarkey name. "They were an embarrassment, a damn embarrassment! Daddy said the original Sons of Malarkey may have broken the law but it was done in good humor. Other than bootleg alcohol they never touched drugs and they may have paid a few girls for their services but they were never pimps or loan sharks."

The second Sons of Malarkey group fell apart sometime in the Sixties. No one in Cabarrus County cared about them and there was little to attract a young man to the group. Hell bent boys moved to Charlotte attracted by the increased opportunity for profit through real graft. Boys who inherited a taste for law breaking on a local scale were regaled with the exploits of the original Sons of Malarkey and the current version of the 1950s and '60s paled in comparison.

In dusty clothing trunks throughout Cabarrus and Union counties sit brown leather jackets embroidered with a four leaf clover and Gaelic script exclaiming "To hell with you!"
Posted by Edward Watson at 4:34 AM