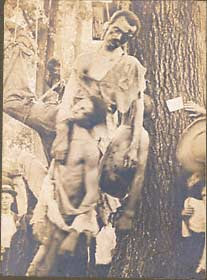 After the Governor ordered the National Guard to restore order, local officials arrested more than two-dozen suspected leaders. One of the killers, George Hall, was convicted and sentenced to 15 years at a hard labor in the state penitentiary. The New York Times predicted that, by taking these measures, North Carolina's Governor Glenn was not improving his political prospects.
Posted by Edward Watson at 7:32 AM No comments:

The Boys of Summer

I have to thank my sons for renewing my interest in baseball this past winter. It began when I took Caleb's Cub Scout den to the local card shop as part of their Collections achievement. Caleb has never shown any interest in baseball or card collecting but the card shop owner certainly turned the switch on for Caleb. Now we're collecting non-stop, we're junkies looking for the next score.

When I was born, my mother wanted name me after Hall of Fame New York Giants pitcher Christopher Mathewson but my father over-ruled, I guess he had his baseball limits. I collected cards as a child and played little league baseball, although not very well. For Christmas in 1982 my parents gave me season tickets for the Columbia Mets, New York's Single-A minor league team. The commercial paint contractor my dad worked for had been painting the park and my dad got to know the general manager real well. My dad breathed baseball. For a while, I believe baseball was his religion.

The Mets' inaugural season began and I hung out near the bullpen, at first because it was easy to get autographs but eventually I got to know the players. I'm not sure why they found it interesting to talk to a 14-year-old kid, but they did. I got to know Eddie "Smoke" Pruitt; Stu Foulks, the Jersey-born Springsteen fan; Kyle Hartshorn, a 1982 high-school graduate from Allen Town, NJ; and Michigander Mickey Weston, who would later be the best man at my wedding. I would spend the game running between the bullpen and the concession stand retrieving snacks for the players. They kidded me about my Southern accent and I'm sure I asked them a million stupid questions. Mickey's autograph had "Rom. 10:9" written below it and I had to ask what it meant. Mickey recited the Bible verse and eventually led me to re-dedicate my life to Christ. Instead of a wartime foxhole conversion, I was a teenage "bullpen conversion".
My family made the pilgrimage to Cooperstown three times, witnessing Hank Aaron (1982) and Enos Slaughter's (1985) induction into the Baseball Hall of Fame. The morning Slaughter was inducted, my family had breakfast with some of his family. In 1982 we saw the Chicago White Sox play the NY Mets and in 1985 we watched the Boston Red Sox play the Houston Astros in the Hall of Fame Game. President Ronald Reagan attended the 1985 game -- I was impressed by the Secret Service Ford vans with the racked Light Anti-tank Weapons (LAW) inside.

My father seemed to know more former pro players than any normal person should know. He and I visited former Milwaukee Braves right-fielder Bob "Hurricane" Hazle at his house on two occasions. Mr. Hazle signed some cards for us and even gave my dad a baseball autographed by Milwaukee Braves players from an early-1980s Braves re-union in Atlanta. I met Bobby Richardson, Kirby Higby, Billy O'Dell, and Bob Feller, among others.

My father and sister Elaine purchased a bunch of Piedmont cigarette cards about this time, garnering several Ty Cobb, Christy Mathewson, and Walter Johnson cards. My dad started purchasing complete sets of Topps, Fleer, and Donruss cards. He also started his subscription to a collection of Perez-Steele postcard sets. While in high school I made a fairly accurate calculation of the collection and numbered it about 40,000 cards. This past Christmas break I took the family to my parent's house in Mt. Holly so Caleb could see some of my dad's collection. He was floored as we brought out tub after tub of cards, balls, old magazines, and pennants. That didn't include the valuable Piedmont cards in the safe deposit box.

For Christmas I emailed Mickey to request that he sign some cards for the boys. I think Mickey's cards were their favorite gift on Christmas morning. Caleb slept with Mickey's card for weeks before he finally accepted that it should be kept somewhere else. One of my favorite gifts was the autographed ball from Caleb! I've been watching spring training games and sending cards to players requesting their autographs for the boys. Chicago's Jim Thome returned the 8x10 signed but Stan Musial requested a payment for his personalized autograph but Musial did return two signed player profile cards for the boys. Hopefully the next few weeks will bring us more signed cards.

Caleb wants to play baseball in the YMCA league later this spring and we will attend more Kannapolis Intimidators games this summer. I hope we can spend father's day at the Intimidators' park again this year. I really enjoyed going onto the field after the game to play catch with the boys last year. Mickey will be down this June visiting the Intimidators and Charlotte Knights in his role as Chicago White Sox chaplain. I look forward to the kids meeting Mickey.

I think after my father's death in 1998, I couldn't enjoy baseball anymore. We had spent too much time in ball parks and other baseball events together before I went off to college. For whatever reason baseball did not turn into a memorial to my dad, a way to keep him alive. Oddly enough, painting became a mediative experience for me. Rolling paint on walls as I had done with my father over two summers while in college provided a communal environment. Perhaps my father will return to the baseball park with my family this spring. Maybe in some way my dad can sit with me and the family behind home plate. I sure hope so, I miss him.
Posted by Edward Watson at 4:50 AM No comments: